I don’t really do “New Year’s Resolutions”. I prefer to pick up and pursue challenges as I go along. It’s a while since I have set myself a good one – something that will take a bit of effort to complete. But here it comes. – the first formal personal goal for the coming year.

The lake in (what I call) our back garden is Norvikken. It’s a decent sized freshwater lake north of Stockholm, about 7km long, and about 400-500m wide. It freezes in winter. And when it does it is supposed to be one of the best skating lakes near the city. The kommune even clear the path all around the outside so there is a 17km distance ice skating track. 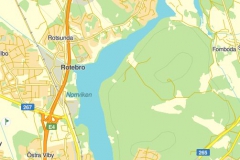 My goal is to skate the full 17k before the winter is out.

To do this I am going to need to:

I also need the lake to freeze again. It has ice at the moment, but a recent thaw has thinned things quite a bit.

I’ll keep you posted on how things go. The first step should be the easiest. Our little housing development has 2 small playing areas – bigger than basketball courts, smaller than a full astro turf pitch. In the winter they flood them and let the water freeze. This gives a safe skating surface for the kids. Once I get some skates I can go and embarrass myself there. I may need wrist guards, knee pads, a helmet and a dignity hiding bag as well though.

Debating lefties – No, I won’t roll in the muck with you.

We all know the moment. You are surfing on the ‘net and you see something you feel you just have to comment on. Maybe you have personal experience. Or a strongly held opinion. You jump in and state your piece. Quite often it goes nowhere. You might get one reply, or a like, thumbs up, or some other minor validation. If you are on TheJournal.ie you will come away feeling as if you swam in the raw sewage of stupidity, ignorance, and small mindedness. Occasionally you will have a good backwards and forwards. Sometimes you may even change your views.

There are certain dogmatists it just doesn’t pay to debate though – unless you are a masochist, or fancy some trolling. The sort of ones that hold their views regardless of evidence (true believers). Perhaps they have formed a world view so divorced from reality it is hard to know where to start engaging them (conspiracy theorists). And there there are the ones, who just don’t know how to debate.

For most of us, debate involves taking and defending positions, posing questions to your opponent, and using stuff like evidence to make your argument. I have not run into a Trump supporter online yet (they must be out there), but I do get pretty frustrated at a lot of the Left wing commentators you encounter. They just don’t seem to know how to have a discussion. The danger is that you don’t realise this, and you tie yourself in knots trying to engage them on their terms.

My most recent example was in a discussion online over Syria. The details are not important (they weren’t to him). This person kept describing anything as I said as being part of “the Washington Wall Street consensus” (I think that was what he called it). And then pretty much refused to accept it in any shape or form. I tried work with these parameters – understanding what was this worldview he held. And seeing how I could talk around it. This was a mistake. I was effectively letting him get away with whatever gobbledegook he chose to take as a given.

Frankly his position was childish – trying to dismiss a line of argument out of hand because of “stuff”. I was told that I had to go read 2 books so I would understand where he was coming from. Sorry that is not the way discussion and debate works. For their faults Right Wingers (I debate them as well), don’t tend to reject you with a “your view is just a restatement of the discredited flumpty goop position. Read Gruber and Jones to see how you are wrong”.

I don’t fancy going down that road again. So the next time see this behaviour I will be saying:

“No, I don’t know know what you are referring to. And no I don’t feel the need to complete your recommended reading list before having a discussion. Your argument needs to stand on its own merits. In the mean time please stop with the dismissive childish name calling, and debate like an adult”