(They do not send the Article 50 Notification.)

We got back from a family camping trip in Sweden and Norway a little over a week ago. I thought it would be useful to let people know what the experience was like in case you are considering bringing the tent and a car to Scandiavia.

We had a 2-week camping holiday in the south of France last year. That was a pretty good experience, and we were hoping for something similar this time around. It wasn’t. For a load of reasons.

On our trip we headed west from Stockholm to Karlstad where we spent a night. And from there we continued on to Oslo. The plan had been to go all the way to Bergen. But although we had not seen rain at that stage the forecast was dire for the coming week on the west coast of Norway – 8-10mm of rain each day. And having now seen what the local camping experience was like we decided that it we were to see the Fjords in the rain, it would be with the comfort of a hotel to greet us each evening.

The setup for campers

There are no shortage of campsites around. What we quickly discovered is that they are primarily intended for people with caravans and camper wagons. Our first inkling of this was when we rang up to book plots and were told that if we had a tent we could just turn up.

Those facilities were in excellent condition, clean, modern, with loads of hot water. But there was a definite impression that servicing people in tents is something of an afterthought.

Even when you pay there is none of the careful calculation you would see in France for text size, car, number of people, etc. It tended to be a flat rate each time. No one asked how many people, what size tent. We would just be told this is the rate, go down here, and pick any spot you want. Just stay 3m away from anyone else.

Who were we pitched alongside?

When you camp in France, or Italy, or even Austria (no experience of Germany) there isn’t the impression that it is something just for penny pinching students. Families do it, couples do it, and the people in the pitch next to you could be driving an Audi S6.

But in Norway and Sweden I don’t think we saw any natives with children camping. Most of those in tents were from outside the region. There were ubiquitous French and Dutch, and others from as far away as Slovenia and Spain. But family camping seemed to be the exception. And those that did it had older children than our 4 and 6 year old.

Would we do it again?

Nope. Not on your nelly. We were lucky with the weather. But we were eaten by mosquitoes in one place, and nowhere did we appreciate the trek to the showers and loos each day. Generally we had more privacy as we were 5-10m from anyone else. But it just felt like a rougher standard of camping that we had before. And it was not comfortable for a family holiday. Maybe when the children are older. But you won’t see us under canvas as a family in Scandinavia again anytime soon. 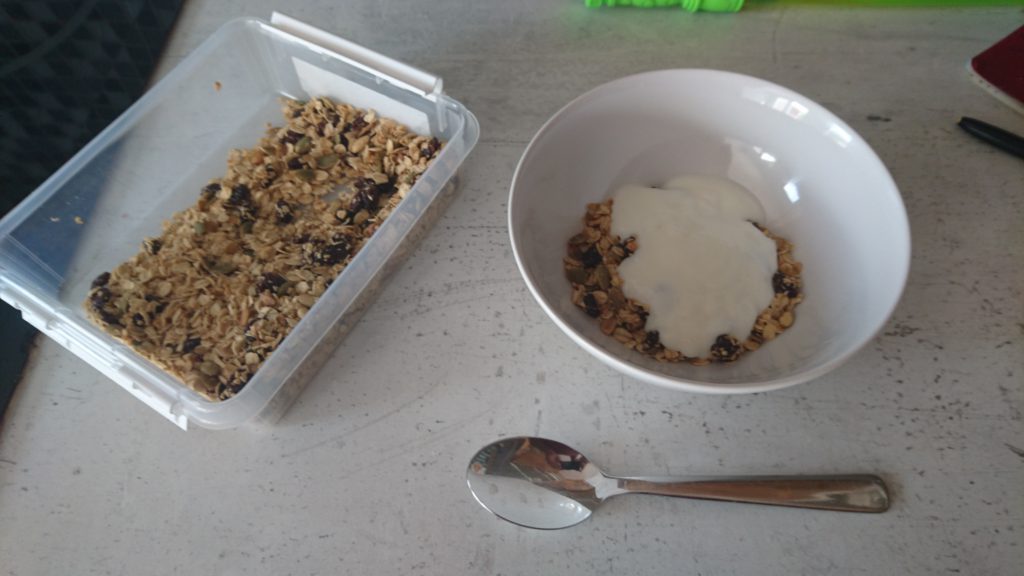 I finally found a way to enjoy oats in the morning – turn it into home made granola. Then eat with some yoghurt. Yummy.

To make it take:

The smell alone in the kitchen afterwards makes it worth it.

I’m a Sex Worker, and This is What I’ll tell my Child.

I worked in the service industry as a consultant. I kept long hours. I traveled at the whim of others. They rented my body out to clients for what they felt like. I sacrificed hobbies, friendships, and family relationships for this. I put my health at risk.

I have yet to hear a decent argument against prostitution that could not be applied to some of the work that I have done.

Grrr, I have a wailing and gnashing of teeth underway as I am missing the opportunity to meet and work with this amazing Engineer in a few weeks in San Francisco. I am not part of our team travelling to be there.

My elder daughter and I have started watching all sort of cool geeky stuff on YouTube at night. It was Chris Hadfield* this evening. Tomorrow I think it needs to be Simone.

* She was fascinated by the whole life on the space station thing. And I have been asked three times to explain why everything floats in space. Its great when you can stimulate curiosity like that**

** The one complaint – she was amazed when she saw a female astronaut. I need to beat that submissive attitude out of her.