Where did Hurling come from? No, really?

Origins of hurling in Ireland – image presumed to be accurate.

Unesco has added the Irish sports of Hurling and Camogie to their list of “Protected Cultural Activities”.  I am not sure what “protected” means here (and I am too lazy to find out – hey! Its nearly 2020, in the age of fake news, people don’t have to look deal with reality if they don’t want to.

If you do want to explore a bit of reality though, there is a comprehensive look at what we actually know about the origins of Hurling here,  from Aidan O’Sullivan at the UCD school of Archeology.

I was looking at the lengthy, and depressing list of fake stories the British press ran on the EU for 20 years.

It struck me that this systematically feeding nonsense to someone to manipulate their opinions and behaviour has a name – Gaslighting.

The madness that is Brexit is a prime example of the gaslighting of an entire country. Politicans and the public driven to psychosis by a systematic stream of misinformation, deception, and falsehood.

Farage and his kind tick so many of these boxes, it is scary: “11 Warning Signs Of Gaslighting“.

As I Iook at the collapse of the UKs credibility and reputation as a result of the shambles that is Brexit one of the things I would get most angry about is that these shameless manipulators will dodge most of the responsibility to the harm they have done.

One of my guilty pleasures is reading reviews of really bad films. It can be fun to see professional reviews unload in as inventive a way as possible to describe the steaming heaps of manure they were forced by their jobs to give up some hours of their life to.

But I think that pales in comparison to the invective written about Brexit. Anyone with more than a passing knowledge of reality can see how much of a catastrophe this is – a really bad idea to start with, now being executed with jaw dropping incompetence. It’s small comfort as we approach the catastrophe, but stuff like this does bring a little smile to my face.

On the way to Mars

Google tells me that I am progressing well to Mars. I need to take a large number of intercontinental flights though if I am to make progress on this. 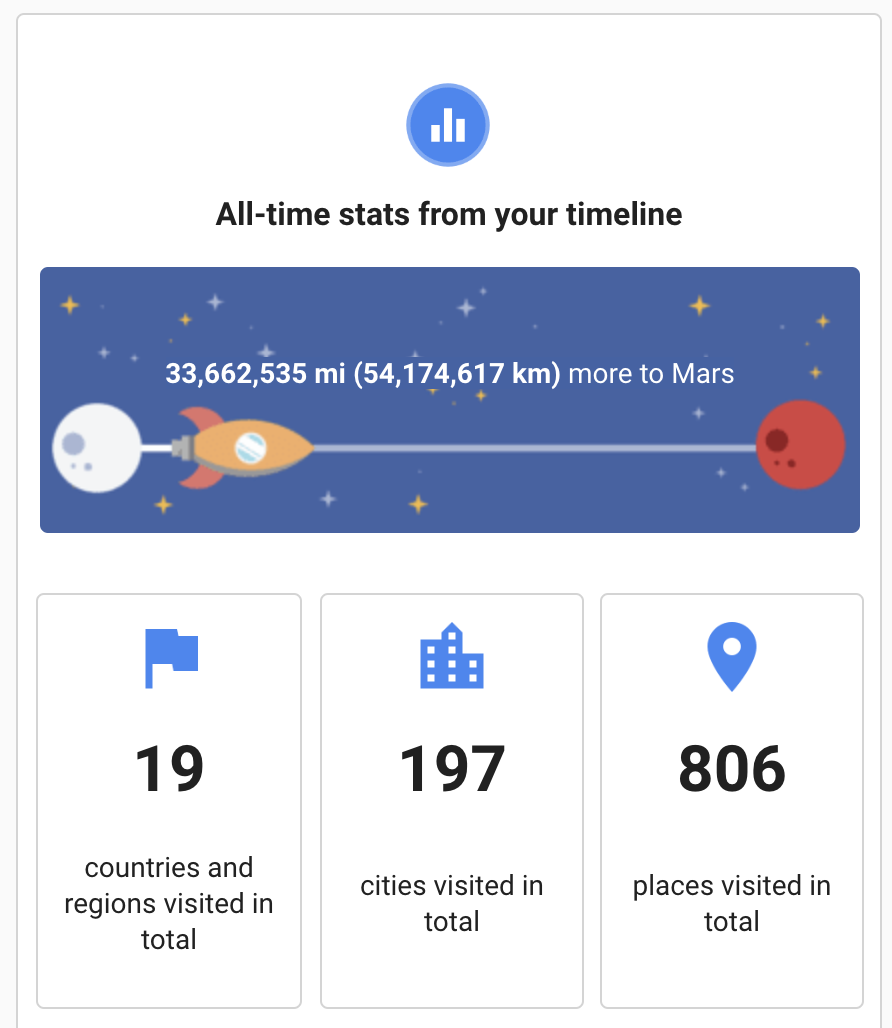 This is one of the coolest maps that floats around on the internet. It get re-tweeted and shared regularly. 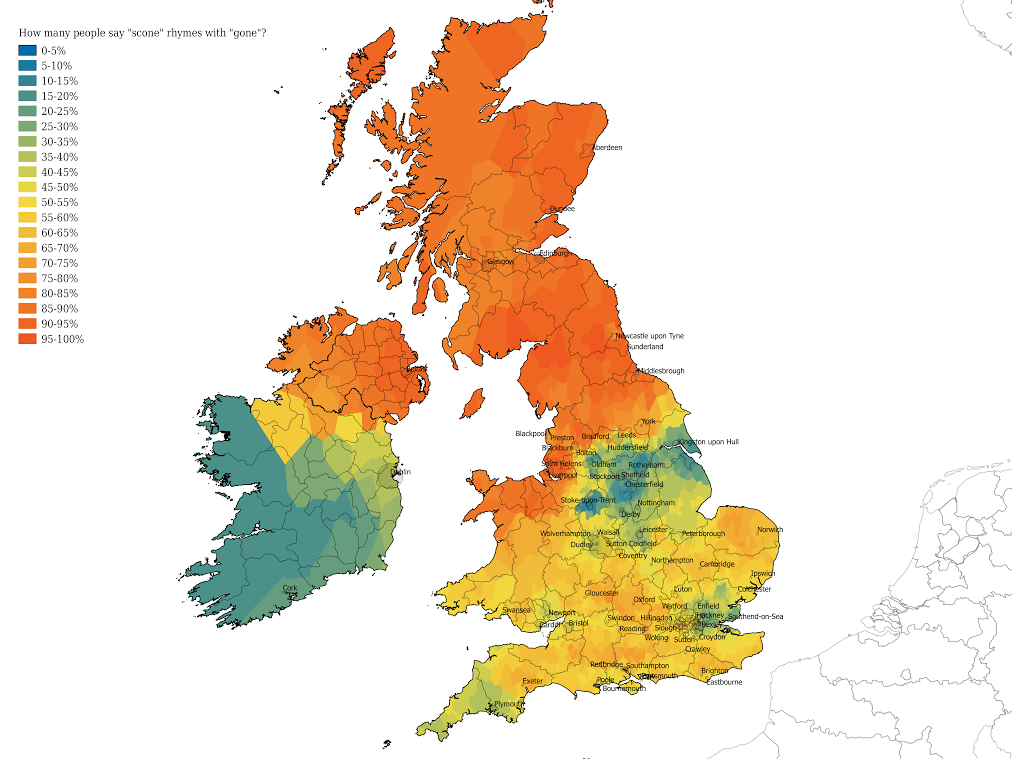 IMHO this has to be the pinnacle of the internet. But it rarely gets a citation for where it came from. I discovered that it is from a University of Cambridge study on the decline of regional dialects. There are a few interesting things in there including – like  differences in pronouncing the “r” in “arm” exactly correspond to the Scottish-English border. The researchers reckon they can place where you are in the UK to within 35 miles based on how you pronounce certain words.

For me the main use of the excellent “scone” map is to identify where to prioritise the location of the compulsory re-education camps for when I come to power. Together we will end the use use of the blasphemous “gone” pronunciation.

Life has taught me we are all broken things…
Some of people are just better at hiding it.

There is a sadness, greater or smaller within everyone. A big part of like is learning how to mange that burden.

Of butter and horses going to France

In 1998 everyone* in Ireland wanted to know who was bringing the horse to France.

Shockingly it turns out that not everyone was. Some of my Irish friends here in Stockholm who would be the right age had no idea what I was talking about when I made this reference!

I was sent this by my former house mate PaddyK.

It is a (lengthy but) amusing video about how Apple gets away with manufacturing defects that other laptop makers would not. And worse their customers excuse them and then keep paying the premium for these poor experiences.

I have been using a MacBook almost exclusively as my work machine for about 6 months now. A later post will talk about how that has gone for me. Right now though I want to talk about “The Apple Test” – my way of deciding whether it is worth your while having a debate with someone.

The test came about when I was having a chat over a beer with a long time Apple product user. It was good natured, but the guy, who did not have a technical background, didn’t accept my technical explanations for why other products might be better. Eventually I asked him:

“What would it take to change your opinion of Apple stuff”

His response was that there was nothing that would change his mind.

That is when I realised I was wasting my time. If your position is that no argument will change your opinion, then you are a zealot. And it is pretty pointless engaging such people in a debate.

I now use the same standard with a lot of other discussions. Lets say I have someone strongly attached a a position e.g. Trump, Global Warming is a hoax, Brexit. Rather than butt heads trying to shift the immovable – ask them the question – what is the thing that might change your mind?

Worst case they will make it obvious you are wasting your time having a discussion with them.

Best case they will have a think themselves about what it would be. And then maybe they will be more open to persuasion?

Rather than come across all holier-than-thou I accept I am as bad as the next person. There is a strong instinct to reflexively reject an argument that is against a position they you hold strongly. Ask yourself the same question from time to time – what would change my position?

And the other important thing is – be open to shifting what you think. It is important you do this regularly. It is a sign that you are receptive to different opinions, different evidence. You want to find the best answers.

Here is a question for you. What is the last thing you changed your mind on? 🙂

Ask and you shall receive

I said this 2 years ago about blasphemy in Ireland:

“Regrettably Ireland is on the list, and will remain so until we are let vote through a change to the constitution.”

I’d say I would have been be pleasantly surprised to know that we sorted that one out so quickly.

Thank you to all who voted.