Self driving – is it ready for Europe (and the rest of the world)?

This is an interesting (but long) read on the Atlantic about Google’s facility for self driving cars. To supplement simulations they build physical replicas of real infrastructure to test the cards. This caught my eye:

If Google’s tech is only at the level of handling US infrastructure then we are a very long way from widespread adoption. Anyone who has driven in the US knows how benign their roads are. If they think a 2 lane roundabout is a challenge, wait until they get to Europe! I will know the technology works when it can drive into and out of someplace like Rome at rush hour!

Still, read for your self what goes on here:

Should everyone have a personal body cam

Should we be recording everyone and everything around us all the time? Put it like that I definitely say no. Its was obnoxious when Google suggested it with Google glass, and it is no better an idea a now.

The only thing I would say is that as an approach to deter a mugger, I’d rather have a camera streaming to the web than carry a weapon. The latter would always make me feel less safe.

I got to see Christopher Nolan’s Dunkirk last week, in an IMAX theatre. It was my first time in one since the days of the Sheridan IMAX in Dublin before 2000. Back then there were few IMAX films, mostly just indifferent documentaries. I hadn’t been impressed, and it wasn’t a surprise when the Sheridan IMAX closed after only 2 years.

After this trip I have to say that as a cinema experience, with a decent film, IMAX is very impressive. I’d consider paying the premium again for the right type of film.

Was Dunkirk such a film? I would say so. I felt it was very dramatic. At times tense and terrifying, despite leaving out the things that have become standard from modern war films since Saving Private Ryan – rapid cut editing, epic CGI, and buckets of gore. I am not sure how much to credit the film or IMAX, but I was really drawn in. The opening scene with the soldiers walking down the street and then coming under fire from unseen Germans was a good example. The scene was set, you were shocked, and you felt the panic of the characters even though you knew nothing about them.

For the most part the film sustained this through the three separate, but interlocking story lines. But as it got closer to the end it seemed to lose its grip.

There were repeated clangers that broke the immersion. I was left going – “hey hang on”. And it didn’t feel like I was watching a master film maker at the top of his game. Nolan began to take serious liberties with time and space that I struggled to overlook.

The crash landing Spitfire is seen from above to come down beside the small motor boat. But when you see the pilot’s view from inside the cockpit it over flies the motor launch and then flies on for several hundred meters. The Dornier bombs the minesweeper, is shot down, and then circles all the way back to the sinking boat to crash right into the oil slick?

The scene with the soldiers in the trawler just was ridiculous. They debate losing weight by throwing one person overboard while tons of water are sloshing around inside. And then somehow though no one is shown running the engines (or bailing the boat) it is out in the middle of the channel when it sinks. The whole scene where a Spitfire with a stopped engine shooting down a Stuka was beyond silly.

There were a load of minor gaffes as well (e.g. the burning Spitfire at the end was obviously a model). I have seen a list of historical quibbles as well, which you can read up on here. The gist of them was that – the real Dunkirk was more crowded with soldiers and boats, it was smoky all the time (the painting above is from someone who was there), but the weather was dead calm. And despite the impression given in the film, the small craft only picked up about 5% of the soldiers.

The crux here seems to be that Nolan has an aversion to using CGI. As a result much of the beach scenes looked under populated, and cheap. We got the tension and chaos of Dunkirk. But we didn’t get a feel for the scale of the event. Game of Thrones episodes have done “epic” far better on more limited budgets.

There is a degree of nit picking to this. It still is an excellent film. But I think it could have been more with some relatively small changes.

Overall – I would rate it as worth seeing. I’d give it 4/5. But I still think the Dark Knight is Nolan’s best film 🙂

To water your whiskey or not?

The Washington Post has an article on the merits or otherwise of adding water to your whiskey. Most “whiskey drinkers” I know don’t. They take theirs neat. The article below goes into a detailed scientific examination of the pros and cons from a flavour compounds point of view.

Personally, though I don’t drink that much whiskey these days, I always water mine. Why? Because I used to work for Irish Distillers. There I worked with professional whiskey tasters (among other things they had the job of checking the newly blended batches against reference samples). One of the things I was told by them is you always water your whiskey. They didn’t have some fancy justification based on detailed analysis of the outputs of a gas chromatograph.

No, the reason is that undiluted 40% whiskey overwhelms your taste buds, so you can’t actually appreciate the flavours of the drink. The “purists” who drink their whiskey neat actually never get to properly appreciate what they are drinking because they have effectively concussed their palate!

Funnily enough the scientific analysis came the the same conclusion (it is better to water) but for different reasons.

Can we consider the discussion closed on this on then?

The best way to drink whiskey, according to science

Here is a list we can be happy that Ireland comes last on. But we should be a lot happier if we were not on it at all. Someone has taken the list of countries that have blasphemy laws – and then ranked them by the degree to which they are enforced. Regrettably Ireland is on the list, and will remain so until we are let vote through a change to the constitution. But at least there is recognition that the laws we have are token and not enforced.

Of course it more usually is:

A friend has the motto “do more of what makes you happy”. In that vein this year I find myself playing loads of board games with people in Stockholm. Unfortunately I find I am not playing enough. I am part of a group that meets for 2-3 hours every 2 weeks. I have discovered that I have a gaming itch that needs to be scratched far more regularly!

I have been investing in games with strong solo player modes. Terraforming Mars is excellent in that way. But this evening it was Scythe. I picked it up a week ago and have been getting to terms with its very interesting mechanics. 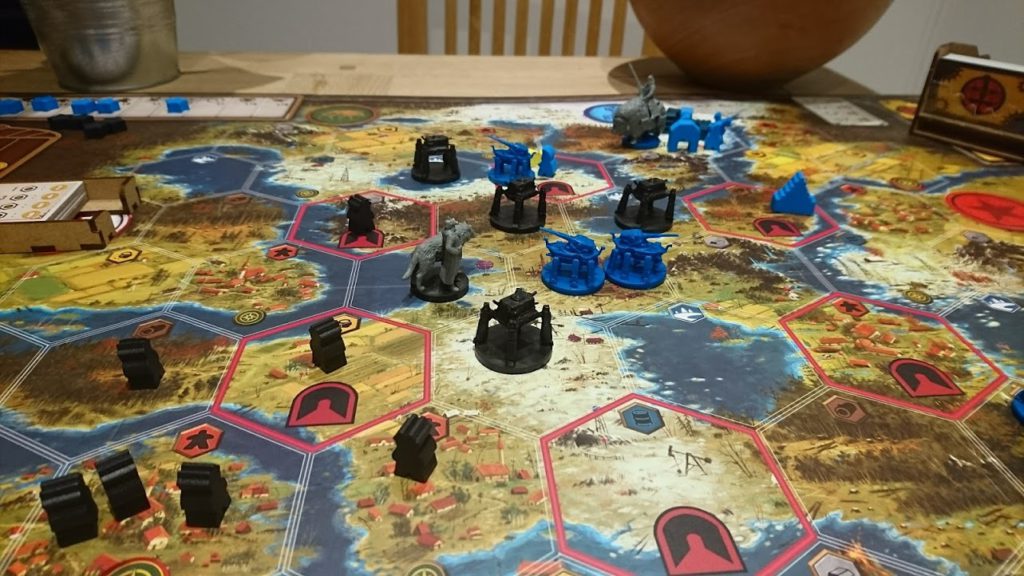 The other thing I am discovering is that I want to make a few games myself. There is one or two in me. Perhaps they will see the light of day yet…

One thing I have been doing in 2017 is spending more time on the water. I have been out kayaking a bit and I really want to do a lot more. I like the freedom, the simplicity, and the self sufficient nature of it on the overnight trips.

The girls are a little young for it, but we have a local lake, with a canoe club, and a stock of canadian canoes. So down we went today. The girls acquited themselves well. 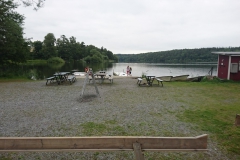 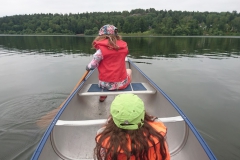 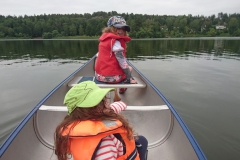 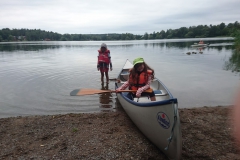 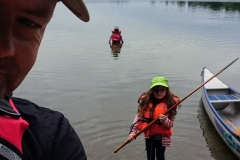 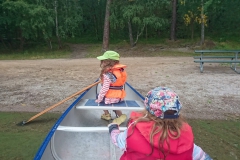 The problem now is that they are dangling club membership in front of me. Pay about €50 and never have to pay for rentals again. But I haven’t been a canoe club member before. Thats a line I am not sure I can go over…

Angela Merkel – woman of the people

Amazing photo of Angela Merkel from her early days as an elected representative. Contrast that with some of the other world leaders she shares a stage with.

NOT a painting: Frau #Merkel with fishermen in Rügen, November 1990. Her first electoral campaign. She has held her constituency since then. pic.twitter.com/1IUoURBnJ9

What is the plan?

A little while back I asked myself why I was not using this site. I love writing and interacting with people online. So why did I drift away from blogging? The reason is that of course all the action is with Twitter and Facebook. Its easy to do it there. But the trend there is for short shallow content. Which is fine. I would like to have a forum for longer deeper stuff. I like writing and this is a good place to do that. But I also want to keep up the stream of whimsy as well.

So the plan is to make this my first port of call for posting. Most of the time posts here will be posted on to Twitter and Facebook. And sometimes I will use the short nonsense here as well.

In the next week I want to do some testing of how the integration between the various sites work. So expect to see weird results. Then I have a load of drafts I need to clear out. Some of them are very weird (consider yourself warned).

Along the way I need to clarify what this site is for. What is the voice here. Who do I want to talk to with it and how. I have a few ideas. Lets see if they coalesce. 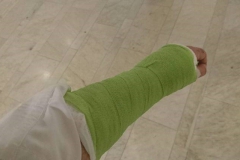 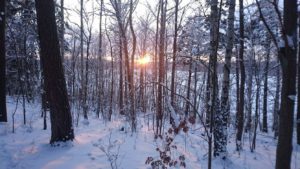