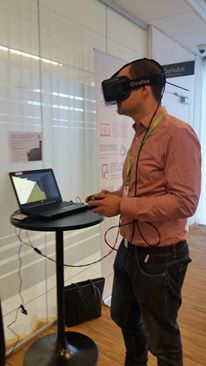 Oculus Rift vs the HTC Vive

I have been humming and hawing for a while about  VR headset. I am excited by the technology and I have played around with it at work (2nd gen Oculus) and at CES (3rd Gen). Hey I had even played around with one of the original arcade VR systems back in the 1990s when they first came out.

The problem has been deciding which headset to go for – Oculus Rift or a HTC Vive. The descriptions of the capabilities of the Vive do seem better – full room scale VR, and it will ship with proper controllers. Though there haven’t been proper head to head comparisons yet but they will come.

The reality though is that the Oculus Rift has already lost this battle, and has a serious credibility problem. Less than a month from the launch date, they have amassed three pretty major strikes against themselves*:

The race for the VR business is just beginning, and already Oculus are coming across as shifty and a laggard compared to the competition. Much of this may be because – Oculus is backed by the deep pockets of Facebook, but neither has ever shipped hardware before. HTC for all its troubles in the handset business is experienced at this.

In the next year or two we may see the market discussion go the way of the console wars where Playstation and XBox sales figures are compared every quarter. But just as the PS4 soundly thrashed the XBox One in terms of sales, I think the same is in store for the Oculus – despite the price difference.

Once I have sold the kidney to pay for it, I know which one I will certainly be getting.

* And now Eve Valkyrie, which was a launch exclusive title for the Rift will be available for the Vive later this year. That was something of a killer app for me. Now it is coming to the competition that’s game set and match to the Vive.