I still have a vestigal coding instinct 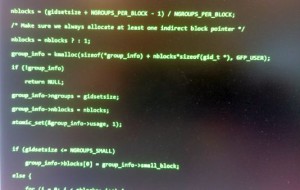 I haven’t coded for years*. But I was drawn to this story in The Register about customers and scary code. One of their examples was of a piece of terrible code that it took two embarrassed engineers a week to figure out. I was chuffed that I saw what was wrong straight away. Can you?

Maybe if this whole Cloud Strategy and Marketing thing doesn’t work out I can go back to being a coder.

* My last serious coding was probably in 2004 when I was working as an Oracle developer and DBA. I worked for Accenture at the time and the customer was a large European mobile operator. We were building them a system to integrate with an external loyalty card platform. I ran the team building the database and we also had to code all the stored procedures the devs working on the business layer were using. I had made the jump from Microsoft SQL Server to Oracle 9i running in Solaris. And after getting over the initial steep learning curve I loved all the control and power I now had over the environment. I ended up writing scripts to build, deploy and manage everything. No more check lists of Microsoft things to click on.