Another great thing about Mad Men – the destruction of Budweiser

I was sad when Mad Men finally came to an end last year. But as well as the fond memories of the program it may be that I can also credit it with changing American’s terrible drinking habits.

According to this article in the Washington Post, since 2007 there has been a 6-fold increase in spirits consumption which a lot of people are attributing to Mad Men making it look cool again. 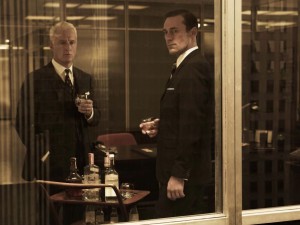 Back when it was fine to drink in the office.

Personally I have moved most of my drinking to spirits as loads of beer is not good for a middle aged waistline.

Whether that is true or not, what is heartening is that overall beer consumption has stayed largely flat while craft brews have taken off. The consequence is that per capita consumption of Budweiser (which barely qualifies as beer in most people’s books) has halved since 2005.

There is hope for the US yet!