Time to stop the unquestioned reverence of 1916

There was an article today in the Irish Times, from the descendent of a person who fought in the Easter Rising. He pointed out that “sharing the glory of ancestors is a rational as sharing their guilt”. This needs to be said a lot more in Ireland. We have a worrying tendency to place these heirs on a pedestal, and defer to their views and opinions as if they were the men and women of 1916. This is of course daft. And it is the sort of hereditary privilege that republicanism (actual republicanism and not the Sinn Fein sort) is against.

It is a short step from there to questioning the whole reverence that the events of the 1916 rising are given in Ireland. The proclamation in particular is regularly wheeled out to decry some action action or inaction of the government. Or to bemoan how the aspirations that triggered the rising and the founding of the state have been betrayed or abandoned. Which is of course bollox. 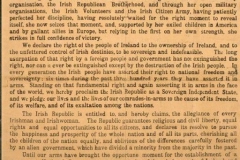 You can’t take a historical document like this, and use it to benchmark the progress of a modern country a century later*. People love to cherry pick and selectively quote bits of it. But you have to look at the whole, and put it in its proper context.

The admirable sentiment about

“guarantees religious and civil liberty, equal rights and equal opportunities to all its citizens”

must be put alongside

“supported by gallant allies in Europe”

and note that those allies had broken treaties to invade a small neutral country where they then committed atrocities there.

“cherishing all of the children of the nation equally”

If only I had a euro for every time someone invoked it to talk about how not enough was being done to help children struggling with poverty, education issues, homelessness, special needs or whatever. These are real concerns, and ones the government should be addressing. But because this is the right thing to do, and not because of a faded document from the beginning of the last century. Especially when “children” here was a shorthand for “citizens”. Or should we insist the government needs to re-focus on ensuing our youth do more to live up to the call for:

The proclamation was a document written by a tiny unrepresentative group of people, who claimed to speak for the whole country. And while it has some admirable sentiments, more of them are questionable. And the whole thing is based on the idea that violence (and the regrettable deaths of innocents) is justifiable in pursuit of their goals. That alone makes it an anachronism today. And it certainly should not be constantly held up as the goal and height to which Irish people should be striving. 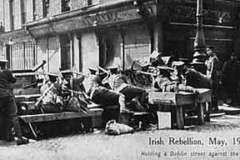 We should aspire to things, and decide how we want Ireland to be now, based on what we believe is right today. I would be very surprised if the men and women of 1916, good Catholics that most were, would have agreed with Gay Marriage, but modern Ireland voted overwhelmingly for it.

I recognise the sacrifice that was made, and acknowledge the part it played in the Ireland gaining it’s independence. But we have moved on. We can learn from the proclamation. But we should not be held captive to it.

* See also the US (pop 350 million) revering what a small number of rich white people (which included slave owners) wrote 230 years when it was a country of 2.5 million. Or the billions or religious who let their lives be dictated by what some tribes of itinerant bronze age goat herders wrote.